Why I Became a Journalist 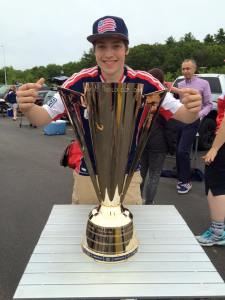 At the young age of six, my parents put me into an after school sports program that my elementary school offered. The program was run on Fridays from 3-5 in the afternoon and allowed students to play sports like floor hockey or kickball. However, I wasn’t interested in all that. Due to my short stature and the fact that I am not athletic, I opted to sit out of some activities. Grabbing a pen and a piece of paper, I sat at the edge of the stage and pretended to be a reporter at the game, slowly writing horizontal lines across the paper as if they were word in an article. From that point on, it’s been all journalism.

My father was the editor-in-chief of a newspaper called Hockey/USA. Run from his office in our house, he was constantly following sports, and taught me to do the same. I learned how to catch, throw, and hit a baseball at the age of two, thanks to my dad. I have always appreciated sports and have been lucky enough to attend many of Boston’s greatest sporting events in the modern era. My dad would sometimes report at these games as a freelancer.

From the age of 10, I have been around the college hockey media. My dad was the radio announcer for Merrimack College Hockey and I quickly became accustomed to the media scene and familiarized myself with everyone. When I was 12, I attended my first event as a member of the media; fittingly, the NCAA Men’s Division I Ice Hockey Northeast Regionals in Worcester. With a pad of paper, I wrote notes for an article I wrote at home, and one my dad published in his paper.

From that point on, it has been clear to me what I want to do with my life. I love to write, broadcast, and share sports with people any way I can. I am a people person (for the most part) and enjoy writing articles or doing play-by-play for games.

My work has appeared in The Boston Globe, Heavy.com, WEEI, FanSided, SB Nation, Inside Hockey, WTBU Radio, and the Daily Free Press and have done game broadcasts for WTBU, Boston Neighborhood Network, and Stonehill Skyhawks TV along with several podcasts.